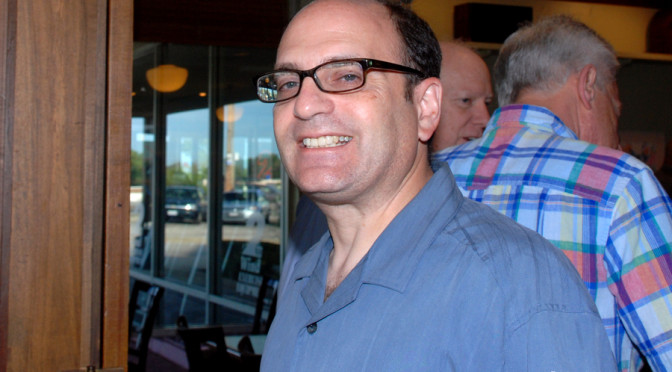 I like traditions. I am a romantic, in the classic sense. I don’t jump on bandwagons and I don’t easily toss away traditions. If your son is being bar mitzvahed, I don’t care what new gadget or technology is trending, the kid is getting a fine writing instrument as a gift from me. That’s how it has been and will always be, at least until handwriting has been officially outlawed and replaced by Bluetooth transmitters implanted in our brains. Long-story-short, killing a tradition is not something that I take lightly.

For many, and to me especially, Breakfast Of Champions–BOC–has become a tradition.

To those that regularly attend the monthly Breakfast Of Champions Networking™ meeting, it is that fourth Friday of each month that they get out of the house a little bit earlier than normal, and head over to Max & Benny’s Restaurant, in Northbrook, with a stack of business cards, fifteen dollars and a healthy appetite for breakfast and networking. For many, and to me especially, Breakfast Of Champions–BOC–has become a tradition.

New logo, full website and active blog, and official Facebook page were all created. The existing Breakfast Of Champions LinkedIn group was enhanced and grown. I began using ConstantContact.com to send out 2 or 3 email reminders each month and to to facilitate registrations and online payments.

Attendees could not just register and pay online, but they could register as PRO Attendees…

Attendees could not just register and pay online, but they could register as PRO Attendees for a few extra dollars each month, giving them a lot of additional exposure throughout the entire month, not just during the one and a half hours of the morning meeting.

Before my iteration of Breakfast Of Champions Networking™, there were no meetings during the summer months. I decided to schedule meetings all year and found attendance did not take a summer vacation.

Having a BOC with 60 people was not uncommon…

In 2011, the headcount at the monthly breakfasts began to rise. When I first took leadership of the group, and I was an attendee, the meeting was attracting 25-30 people. But, our numbers rose to a consistent count between 50-60 networkers, which was the room’s capacity. Having a BOC with 60 people was not uncommon, and at one point, we had an attendance just shy of 75 people. THAT was a “we’re gonna need a bigger boat” morning.

At the end of each year, BOC attendees, friends and colleagues have come together for a big holiday event. Free to attend and supported by sponsoring businesses, the evening includes live music, food and drinks and a great atmosphere to connect and/or reconnect with other networkers. Each year, the attendance grew, from 80 people the first year, to 100 people, to 125 people and more.

I take great satisfaction in how the reputation of the BOC preceded itself as an outstanding group of CONNECTORS.

Making all of the above happen was not easy. But, also not a burden. Branding is my business. As an exercise in developing and promoting a brand, I take great satisfaction not only in bringing people together to make business happen for each other, but in how the reputation of the BOC preceded itself as an outstanding group of CONNECTORS.

When Breakfast Of Champions Networking™ was handed off to me by Chad Coe, the original leader of the group, I committed to run the meetings and promote the group as long as it was something I enjoyed doing and that I could always devote the full effort required of the endeavor.

I’ve never canceled or missed a morning meeting. In good times and bad, sickness and health, for better and for worse…

During the past six years, I have been all in. I’ve never canceled or missed a morning meeting. In good times and bad, sickness and health, for better and for worse, I promoted and facilitated the meetings. In 2013, my father died on May 23rd. His funeral was at 10 a.m. on Friday, May 24th. I woke up that Friday, ran the BOC meeting, sped back to my house in Highland Park to pick up my wife and mother, and drove to Shalom Memorial Park in Arlington Heights for the funeral. Like I said, I have been ALL IN.

As I was packing up my things after the 2015 BOC Holiday Event at Yummy Bowl Restaurant in Highland Park, I took a seat to relax and enjoy some post-party quiet, and told myself–and later my wife–that I would run the BOC for one more year, through 2016.

I am somewhat reluctant to announce, the final morning meeting of BOC | NETWORKING.

As my business, ATI Graphics, Inc., has grown, and I have added a second venture, Funnier By The Lake Comedy, it has become increasingly difficult to devote that full effort and to be “all in” for the Breakfast Of Champions.

While the monthly meetings will end, BOC | NETWORKING will remain a resource and a conduit for connecting with people and for broadcasting information. The LinkedIn group will remain active, as will the Facebook page. The BOC website will remain online with more of a focus on the blog. And, I am considering periodic BOC networking events. But, in general, the BOC will evolve from a monthly meeting to hopefully, something even more valuable.

I am also planning the 2016 BOC Holiday Event, with information coming soon.

So, I’ll thank everybody collectively…

I cannot individually thank every one of the hundreds of people that have attended the BOC meetings over the past six years. So, I’ll thank everybody collectively. All of you that not just attended the meetings, but spread the word and helped the BOC become such a well-regarded, valuable business group.

Hope to see you at the November 18th BOC | NETWORKING meeting!