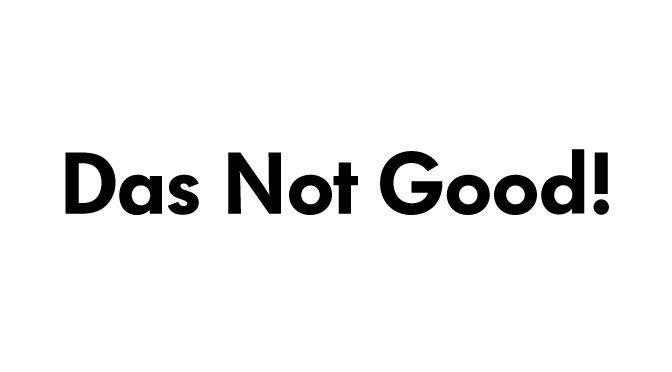 Volkswagen has managed to destroy it’s credibility, along with any remaining Fahrvergnügen left in the brand, after recently getting caught rigging diesel emissions test results on its “clean diesel vehicles. Fahrvergnügen has been replaced by the sorties of F-bombs VW customers are dropping in reaction to the blatant deception that they are now victims of.

Such an iconic brand over the decades, VW created those cute, self deprecating print ads for the Bug in the 1960’s. The appeal of those ads were in their honesty. “It’s ugly, but it gets you there.”, “And if you run out of gas, it’s easy to push.” and “Presenting America’s slowest fastback.” are a few examples of the innocent and truthful captions used to describe the humble VW Beetle.

VW has succeeded in ruining their reputation and is now facing perhaps the largest corporate scandal in automotive history. Volkswagen has also struck a powerful blow to the integrity of the entire automotive industry. We’ve been down this road with other automakers all too recently.

We’ve been down this road with other automakers all too recently.

In 2014, Hyundai and Kia paid hundreds of millions of dollars in damages for inflating MPG fuel economy claims on 1.2 million new vehicles. Was Hyundai trying to gain an edge over the competition with these exaggerated claims? Of course, they were guilty of deception, too.

General Motors badly mishandled a faulty ignition switch problem by not admitting that engines in affected cars could shut off while people were driving. If they had been forthcoming and immediately recalled these vehicles, many accidents, injuries and fatalities may have been prevented. It was the length of time spent covering up the problem that was so unfortunate.

Giant auto supplier Takata Corporation was found responsible for producing faulty airbags that caused the largest automobile recall in history. Possibly affecting up to 30 million vehicles built by numerous carmakers, it is unclear how long Takata knew that these airbags were defective. Ultimately it was the individual carmakers that initiated these recalls while Takata was stalling.

The Environmental Protection Agency may try to penalize VW up to $18 billion for cheating emissions, while consumer lawsuits are piling up at a fast and furious rate. Furious are also the folks now stuck owning these forsaken diesel cars and for good reason.

When will there be a fix to get emissions on these cars in compliance and how will this impact engine performance and fuel economy? How much will these affected vehicles diminish in value now that they are regarded as tainted merchandise?

These are all questions without answers until such time as VW can figure out what can be done to mitigate the damage caused. Meanwhile, say goodbye to Fahrvergnügen, the thrill is gone.

Gary Eisenstein is a third generation veteran of the auto business. He was a new car dealer for over 30 years before founding Better Auto Buying, a consulting service that utilizes his expertise to help individual consumers make successful vehicle purchases. He serves as an independent auto consultant, consumer advocate and wholesale used car broker. Learn more at: www.betterautobuying.com.