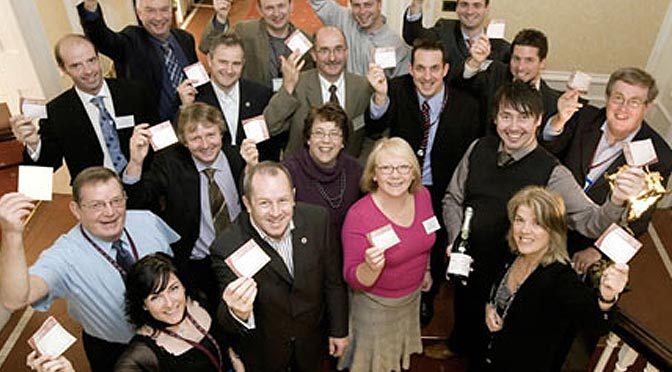 Networking is an important part of business development, especially for small and mid-sized business owners. In addition to creating connections and referrals and generating leads, networking exposes participants to people and information they would otherwise not experience. A networking event is an opportunity to hone one’s communication skills, elevator pitch and brand message. The troubled economy has brought more businesspeople into the networking community. There are all sorts of groups and events. It turns out that the question of which ones to join is not always yours to answer. 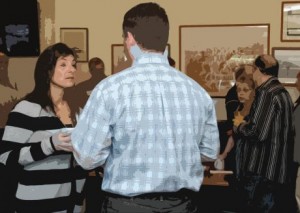 Groucho Marx famously remarked, “I refuse to join any club that would have me as a member.” As one explores networking groups and attends events, the opposite seems to be true, and a word becomes very familiar. Exclusivity.

Networking groups vary in their approach. Some groups are militant, allowing only one member per industry (or industry segment). Many groups let existing members weigh in if a potential member from the same industry requests to join the group. Still, other networking groups do not subscribe to the notion of exclusivity at all. There is no right or wrong here — whatever works best for the group and the individual members. A networker can belong to many types of groups.

Each philosophy has its positives and negatives. Strictly adhering to a policy of exclusivity ensures that all referrals for an industry or industry segment are directed to a single member. When the primary purpose of the group is lead-generation – such as BNI and Le Tip groups – and members are required to make a certain number of referrals each month, exclusivity can be very valuable. Membership in exclusive groups often comes with dues, and if you’re paying to play, the less competition, the better.

Many groups, like the well-established Northbrook group, Breakfast of Champions (http://www.boc-networking.com), are not as concerned with exclusivity as they are with creating a healthy mix of members from a variety of industries or segments. Group leaders can keep the group membership from becoming too weighted in one industry by screening and approving each prospective member. For example, a group of 100 members suddenly has 15 residential real estate brokers. That concentration may make the group unappealing to current and future members. In such groups in which exclusivity is more of a check than a rule, existing members can be consulted before the acceptance of a new member from the same industry.

The Breakfast of Champions (BOC) is one group that “doesn’t sweat exclusivity,” according to group leader and business owner, Larry Bloom, President of ATI Graphics, Inc (http://www.atigraphics.com), a branding and web development company based in Highland Park. Bloom took leadership of the BOC in September of 2010, and has continued the philosophy of the group which was formed in 2003. “The Breakfast of Champions has always been about ‘good’ networking,” says Bloom. “Bringing high-quality networkers together is the goal. These are people that understand that networking is not always about generating leads. It is about creating and nurturing long-term B2B relationships. You can try to sell people today or network with them far into the future.”

On the 4th Friday of each month, Bloom welcomes approximately 40 attendees to the breakfast meeting at Max & Benny’s Restaurant, and he always makes the point that the event is successful when each person in attendance leaves knowing that they now have dozens of advocates for their business.

Bloom says that without much screening on his part, each meeting is a healthy mix of people from a variety of industries. “When I promote the group – online and offline – the messaging is always about bringing great groups of networkers together, and that people should come to make connections, not sales. That message creates a natural filter.” All BOC invites and email blasts encourage recipients to forward the invite to others that can benefit from attending the event. “Our members know what the group is about and therefore know who is appropriate to invite,” states Bloom.

The value of exclusivity is not lost on Bloom. He understands why some groups strictly regulate its membership. “When done right, the group can become a great source of business for the members,” he says. However, Bloom believes that people have to be pretty sharp to work a room with competition in attendance. “If I attend a networking event and there are other branding and web developers there, I know I have to stand out. For example, my 30-second pitch has to be not just informative but memorable. And, if there are 3 other web developers walking around the crowd, then my gravitational pull better be stronger than theirs.”

The best way to decide what type(s) of group(s) you should attend and join is to first ask around, then do some research online after you’ve gotten some referrals from other businesspeople. If you’re new to an area, start with the local chambers of commerce. Chambers have many networking events and by attending them, you’ll learn about other groups. LinkedIn is also a great resource for finding groups in your area. Many online LinkedIn groups have off-line networking events.

Most experienced networkers will tell you the most important thing is to stick with it. Don’t be discouraged if exclusivity policies keep you from desired groups or if you don’t see an immediate return on your networking efforts. Breakfast of Champions leader, Larry Bloom, explains that “networking is about communication, relationships and trust,” and that is all built over time.