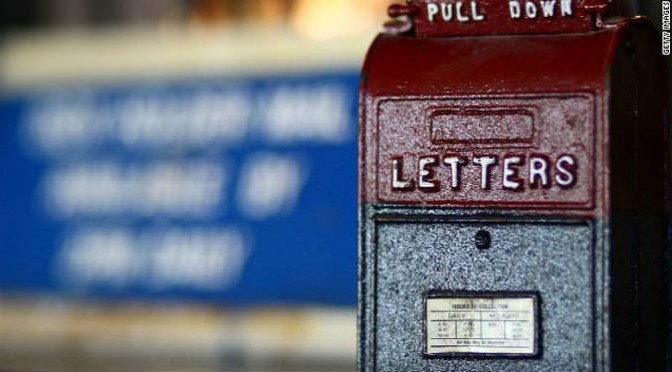 Many years ago, before starting my own business, I worked for a company that was acquired by a very large corporation. While all intentions and attempts were to facilitate a smooth transition, production and delivery got a bit rough and customers were upset with the number of delays and mistakes.

I made sure it was clear…

For a few key customers–those that gave us a lot of business–I sat down and typed a short letter. It was an explanation of what and why we were making changes and that we were aware that during the transition delivery and quality had suffered. I made sure it was clear that these types of growing pains were typical during acquisitions, we were working it out to bring things back to normal.

I printed out the letters, signed them and dropped them in the mail.

“I was really impressed that you signed each letter by hand.”

If I recall correctly, most if not all of the clients that received the letter were satisfied with the mea culpa and stuck with the company. One client visited the business shortly after receiving my letter and said something that has stuck with me ever since. She said, “I was really impressed that you signed each letter by hand.”

Since that time, whenever I send a business letter, whether to one person or a hundred people, I always sit down with a fine writing pen and sign each document.

Over the years, the personal “thank you” note has been replaced by the “thank you” email. For many of those years, I was just as likely as anybody to shoot off an email thanking somebody for a good meeting, new business, a referral or just a good conversation at a networking event.

But several years ago I made the decision to follow up with traditional, hand-written “thank you” notes. I designed a 4×5 card with my logo and basic contact information and ordered a big stack of cards, printed on a classy card stock, with matching envelopes.

Now, after a meeting with a new or potential client, or after having an engaging conversation with somebody I meet at a networking event, I sit down for five minutes, write a “thank you” note and drop it in the mail, sometimes the same day as the meeting.

For this small effort, I get so much credit…

For this small effort, I get so much credit. I don’t deserve it. Really, what I am doing should be–used to be–the norm. The only thing exceptional about a “thank you” note should be if one is not sent!

But, I’ll take that extra-credit. Because, even though, to me, writing a personal note is a given, I know that these days, doing so is hardly commonplace.

Guidelines To Writing “Thank You” Notes

There are a few “thank you” note guidelines that I strongly suggest you follow.

To write a truly sincere “thank you” note, your sole motivation must be to thank…

First, before you start thinking about how beneficial this tactic can be for your business, STOP! To write a truly sincere “thank you” note, your sole motivation must be to thank the person to whom you are writing.

Many people can smell a hidden agenda from a mile away. Don’t think you’re pulling anything over on them by thanking them for taking the time to talk to you at the previous evening’s event and then listing all of the ways you and/or your company can “help” them. Or, even worse, eluding to how your new contact can do something for you, like make a key introduction, for example.

If you are going to write a “thank you” note, write it…

If you are going to write a “thank you” note, write it. With a pen–preferable a fine writing instrument–in black or blue ink, by hand. I recommend investing in a nice pen. Something with weight and style that evenly–no blotches–distributes the ink on the paper. At the very least, the writing of the note will feel more important and significant than if executed with a cheap-o plastic pen.

Typing the note on your computer and printing it in a hand-writing-style font only looks good on paper. In fact, you could end up offending the recipient because such a move may insult their intelligence.

And, while the many, MANY sellers of SendOutCards may disagree, that and similar automated systems are NOT a substitute for a personal, hand-written note. I don’t care if they have technology that can turn your own handwriting into a font. If you consider that an alternative, you’ve completely missed the point.

Personally, it annoys me when I receive such a card. A few years ago, at a networking event, I met someone who when I asked for his business card, said something like, “I’m not going to give you one. But you’ll be receiving something from me shortly.” Soon afterward, the SendOutCard arrived in the mail. Not only was I originally annoyed that he took my card but wouldn’t give me his, but then I receive the most disingenuous version of a “personal” note.

If I write a word that I feel is illegible, I start over…

When I decided to hand write “thank you” notes, one thing I had to do was re-learn how to write notes that were to be read by people other than myself and my wife. Both my print and cursive handwriting were an assault on the alphabet. I draw the pen over the card slowly and deliberately. If I write a word that I feel is illegible–even if it is the last word of the note–I start over. The last thing I want somebody to do is furrow their brow as they attempt to decipher my psychotic chicken scratches.

While you’re re-learning things, be sure to brush up on your grammar, too. A well-penned note, easy to read and illustrating a level of grammatical conscientiousness goes a long way.

Brevity is the key to the perfect “thank you” note…

It is not important to rehash your entire interaction with the person you are thanking. And as I mentioned earlier, the note is not a continuation of your sales pitch. Be brief and include the following:

The optimal “thank you” note could look something like this:

Thank you for taking the time to meet with me after the recent Breakfast of Champions Networking event. I look forward to continuing the conversation.

Toss in a couple of business cards and to really nail that personal feel, hand-write the recipient’s mailing address on the envelope, and you’re good-to-go!

If you have found this article helpful, please, feel free to send me a hand-written “thank you” note.