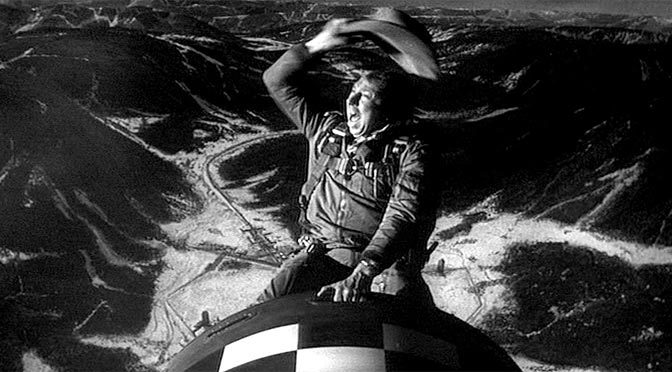 Feature photo from “Dr. Strangelove or: How I Learned To Stop Worrying And Love The Bomb.”

I remember the word “networking” from when I was in college in the 1980s. As a student pursuing degrees in fine art and sociology, and an honorary townie of Bloomington/Normal, Illinois, the idea of some sort of proactive effort to meet people to further a professional or career agenda was an insult to everything I stood for, if in fact I stood for anything.

Back then, networking was something that frat guys did as they earned their degrees in business or management. Kids like me, a weirdo art student that lived over a vacuum cleaner shop in downtown Bloomington, considered life an extended happy hour, and tore around the country roads on debatably safe motorcycles did not think that far ahead. I never imagined that I’d live as long as I have so far. I never contemplated a life past 25. It just didn’t seem…likely. I have often said that if my college years were a Hunter S. Thompson novel, it would be called, Fear And Loathing On Campus!

Since I didn’t have much of a post-graduation plan, networking wasn’t something I needed to give much consideration. All I really wanted to do was finish college and do nothing for a while. I’d like to say that I had a grand plan to backpack through Europe and find myself, but back then that was a whole lot more effort than I was willing to invest. I wasn’t in much of a hurry to do anything or even leave my simple Central Illinois life.

At some point, a couple of years after graduating and knee-deep in a burgeoning career of delivering Chinese food all over town, I decided to take a leap and move to Chicago.

Now, it would be nice and tidy if this was the point where I began to hone my networking skills. But honestly, even though I started working in my chosen field and began to have success through promotions and the luck of having my employer’s company acquired by a giant corporation, which led to an even better job, networking was not in my vocabulary.

I suppose, on some level, I was networking.

My job introduced me to thousands of people from hundreds of companies. Relationship building was key to my work. I knew that, but I didn’t consider it networking. I didn’t go to networking events. I didn’t think to join the many Chambers of Commerce in my area of the city. I was just doing business as it came through my door or as the phone rang with new projects.

In 1997, I had the opportunity to start my own business, something I had always planned on doing. That is a long story that I won’t bore you with, but may write about at another time. Again, this would be the place in the story where I map out a strategic networking plan. Nope. It still didn’t occur to me.

By 1998, I was out of the corporate world and working full-time at my own business, ATI Graphics, Inc. My first new clients were those that I knew from my previous job. They contacted me, or, I would run into an old client on the train or somewhere, and the next day, they’d be a client of my new business. I never asked for introductions or woke up early to attend 7 a.m. networking breakfasts. I probably didn’t even wake up before 10 a.m. back then.

Looking back, considering how well my small business had grown virtually exclusively by word-of-mouth referrals and just plain existing, making a concerted effort at networking probably would have been a good idea. But whaddayagonnado?

We bought a house and moved to Highland Park, Illinois. After living in Chicago for 15 years, and 6 years in Central Illinois prior to that, I was up in the suburbs. Gladly, by the way. After 15 years in the city, you either become a “lifer” or can not wait to leave and never look back. I am a north shore native and welcomed a return to the area.

My wife, Deborah, is the one I credit for getting me out of the house and into networking. Actually, I usually say that she pushed me, kicking and screaming, out the door and to my first Highland Park Chamber of Commerce networking breakfast.

Here we are again, at a perfect place in the story in which I have that “moment of clarity.” The point where the value of networking becomes crystal clear and I begin a new day and my business thrives as a result. No such luck.

I attended a few of the Highland Park Chamber of Commerce breakfasts. I didn’t make any contacts, my 30 second intro was a half-minute of cringe. And while soon I would find my “networking voice,” like many people, I gave up.

Now, when my wife would suggest that I attend a Chamber meeting or some other business event she may have seen posted, I had good ammo for opting out. “I tried that. It didn’t do much for me. No thanks!”

In 2008, a woman I had known since kindergarten began forwarding me invites to a group called, Breakfast of Champions (BOC), run by some guy named Chad Coe. Of course, I see the name Chad and immediately dismiss him as some elitist frat boy. I disregarded the invites, month after month after month, until a second person, a client, suggested that I start attending the breakfasts.

That really was a point at which I said to myself, “Okay, 2 people have independently suggested this group to me, it must be worth checking out.”

The BOC really changed my opinion about networking. The people that attended were professional, generous and totally “got” networking. It wasn’t about closing sales and they didn’t size up a newcomer based on whether he or she could be a client, and if not, dismiss them entirely.

I become a regular member of the BOC. And, after many breakfasts of stumbling through my intro I finally realized that my sense of humor could be an asset and as I noted earlier, I found my networking voice. (Click here to read about that experience.)

Like most people, I spent quite a bit of time attending meetings of different groups and organizations, discovering where I fit. Quite quickly, it becomes easy to evaluate a group or an event and decide if it is worth the time and money to participate. Each person needs to set their own parameters based on their skill, needs and resources.

What I decided, since I am [now] very comfortable speaking in front of groups and have been a manager for many years, is the best groups for me are those that  meet one or more of the following criteria:

With this new perspective on networking and a whole lot more confidence, my networking strategy developed and sticking to the criteria listed above, I became highly involved in a number of groups and events.

I returned to the Highland Park Chamber of Commerce, first as a guest, then a member. I subsequently joined the Chamber’s marketing committee, then the board of directors and am currently the Vice President. I also lead the Chamber’s First Wednesday Networking Group each month.

While attending the BOC, the idea was presented to create a series of large networking events. This became the BizNetExpo that I co-founded with 3 other BOC members, and at which I emceed various panel discussions.

When Chad Coe was going to discontinue the BOC in 2010, I stepped in and volunteered to lead the group. Since  then, I have branded the group, created an online presence with a website, this new blog and social media that allow for advertising opportunities for attendees. The group is now broadly marketed online and offline, and it has grown quite a bit in the past 4 years. Since 2011, the BOC hosts a free holiday event to introduce more newcomers to the group.

It is very safe to say that I have come a long way from shunning the very idea of networking to becoming not only comfortable participating, but a skillful connector of people, a leader and, I hope, a good example for others who may be unsteady and unsure of their place in the world of networking.

Do I love networking?

I’m not sure if that is the right word. Among friends, I frequently state that, “going places and meeting people” are overrated. Networking is definitely no longer a stressful and negative experience. I do enjoy a number of different groups and have met and done great connecting—and business—with many people.