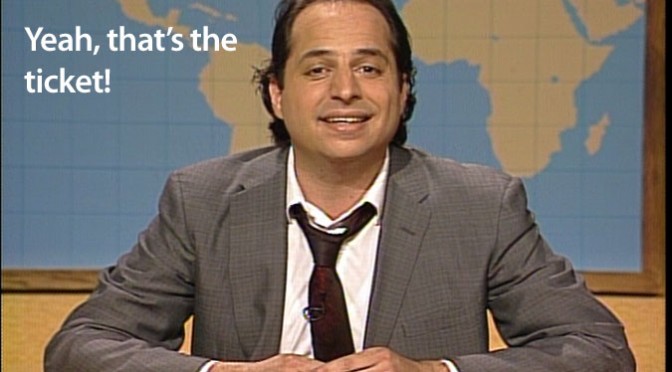 I first moved to Chicago after graduating from college–okay, full disclosure, I had graduated and then stayed in Bloomington/Normal, Illinois for a year and a half in a quasi-student state of mind. I always tell students, “If you want to live free of reality after college, just stay in your college town and live among the students and dropouts.” Hell, where else can you work sporadically, live for virtually nothing–meaning both low rent and no goals–and always find people to party with?

When I finally decided to make the move to the big city, I found a small room to rent in a friend’s apartment. Even though I had graduated into a poor economy that had languished in recession, within three weeks of my move north, I found a job.

I suppose if I was really smart I would have claimed to be orthodox, which would have excused me from work on the Sabbath.

This was not a great job. Customer service. Low wages. Required to work on Saturdays–I suppose if I was really smart I would have claimed to be orthodox, which would have excused me from work on the Sabbath.

Since I was just a rank-and-file employee and not management, when I was off work, I was off work. This gave me an opportunity to find a second job. Just something part-time to give me extra money to do something other than subsist.

During college, and the time after school while still down state, I delivered Chinese food. I really enjoyed it. I liked driving around town, listening to music or NPR. However, being a food delivery driver in Chicago is more of a life or death decision. In addition to the hazards of driving in the city, being setup, beaten, robbed and/or killed was very real.

In college, I also spent time working in bars, checking IDs, collecting cover charges and cooking–being a short order cook is another job, along with delivery driver, that I really enjoyed. While working at a couple of bars, I did tend bar a bit. I’d pull a bartender shift here or there, usually just to fill in for a coworker who was out sick or had decided to disappear for a week.

My goal was to get a job as a bartender. Not a doorman. Not a bar back. Not a cook. I wanted the main stage.

Living on the north side of Chicago–Lincoln Park and Lakeview–you’d be hard-pressed to swing a dead cat and NOT hit a bar. That was where I focused my search for supplemental employment. My goal was to get a job as a bartender. Not a doorman. Not a bar back. Not a cook. I wanted the main stage.

This was a time before the Internet, so I grabbed the Chicago Reader and Chicago Tribune and scoured the classified ads. I also kept my eyes peeled for “Help Wanted” signs in the bars in my neighborhood.

I filled out a couple of applications as opportunities presented themselves. But, my search for a bartender position ended abruptly after my first interview with a manager at a soon-to-open bar in Lincoln Park.

I had tended bar, but I wasn’t a bartender. I could serve up bottles of beer and pour a decent draft. I could make two- or three-ingredient drinks, like “gin and tonic,” or “Jack and Coke,” or a Mimosa or a Tequila Sunrise or a Martini.

It has been over 20 years. But I recall, like it was yesterday, sitting in that bar and having a jaw-dropping moment of clarity. No matter how much I wanted something to be true, it wasn’t and the only person I was fooling was myself. Even if I had somehow squeaked by the interview, my ignorance and inexperience would soon be exposed. Lacking the ability to do the job was one thing, but lying was the bigger infraction.

Some people will believe your bullshit. But the vast majority of those believers will figure you out sooner or later.

Of course, we all read biographies of amazingly successful people who lied to get their foot in the door of an industry. Those people, however, had the skills necessary to make it work. Had they not, they too would have been discovered as frauds and sent packing. This is probably true for the majority of people who trade in bullshit.

Some people will believe your bullshit. But the vast majority of those believers will figure you out sooner or later, and always sooner than you expect.

This brings us to the point of this post. Cut the bullshit.

When you are out there, networking.
If you’re going to bullshit people, networking really isn’t the place to do so. First off, trust is integral. People won’t give you introductions, referrals, leads or business if they don’t trust you. They won’t attach themselves–and their reputations–to you if there is a chance that the stink of your bullshit will stick to them.

People won’t give you introductions, referrals, leads or business if they don’t trust you.

Furthermore, experienced, effective networkers have your best interest in mind. If you’re honest with them, they will know how to help you. Your honesty will allow them to connect you with the appropriate people that can help you reach your goals.

Trying to “fake it til you make it” may sound good but will only make you feel good temporarily.

When you attend a networking event and you’re meeting dozens of people, and when you stand up and give your elevator pitch, just be honest. If your business is stuck in the mud and you could really use a mentor or adviser or funding to get you to the next level, trying to “fake it til you make it” may sound good but will only make you feel good temporarily before a wave of self-loathing rolls in.

You’ll get a lot more mileage out of standing up and saying, “I’m looking for ten new clients,” or “I’ve got a solid business idea but need a mentor or a partner to shift it into high gear.”

When you are selling your products or services.
This is an easy one, because we are all consumers and we all know how it feels to either stand there knowing that we’re being fed a line of bullshit, or even worse, figuring it out later.

“Under promise and over deliver.”

The author, Tom Peters, advises businesses to “under promise and over deliver.” It is tempting to promise the world and hope you can pull it off. But that strategy is a minefield that is likely to blow up in your face.

This does not mean that you have to remain within your present limitations. You just have to be prepared to meet any obligation, whether it is a deadline, or a large product order, or results.

Years ago, I would ask my wife to respond, when her colleagues would ask her if I could do a project, to always say, “yes!” This may seem contrary to the theme of this post. However, I always knew that I had the resources to fulfill any request. I had the capital, skills, available staff and/or additional contractors, all of which I would employ to put the project together and manage it to get it done.

When you are updating your profiles on LinkedIn and other professional sites.
Lying on one’s résumé has always been common and it is safe to say that it is somewhat of a tradition. This scene from the John Hughes movie, She’s Having A Baby, is a great example of a) lying on a résumé, and b) getting busted! Of course, the punchline is that he gets the job—It is a movie, after all.

Just because lying on a résumé  is a tradition does not make it by any means noble. And it also doesn’t guarantee that it will be appropriate across modern platforms.

Unlike a stack of résumés, the great majority of which will be glanced and discarded, an online, professional profile is available 24 hours a day, to thousands of people. On LinkedIn, your profile is available for viewing by not only your direct, or “1st degree” connections but also people once removed, or “2nd degree” connections. Depending on how many people you may be connected to on the site, this may mean thousand, or hundreds of thousands of people.

Sometimes, I just have to shake my head when I read the online profile of somebody I know well enough to know that either a job title is embellished, a timeline makes no sense.

The problem with lying is that one must support a lie. A lie needs to be remembered, and anything that lie touches needs to be adjusted to suit. The truth requires no such extra effort.

If on your CV or LinkedIn profile, you lie about your title, your accomplishments or your longevity at a certain job, you will always be one question–or one LinkedIn inquiry–away from being exposed as full of crap.

The worst part of bullshit is the inevitable exposure—sooner or later—of being a liar. All credibility is lost. You don’t want that. At least, you shouldn’t want that.